Soapstone in its raw mineral form

Soapstone (also known as steatite or soaprock) is a metamorphic rock, a talc-schist. It is largely composed of the mineral talc and is rich in magnesium. It is produced by dynamothermal metamorphism and metasomatism, which occurs at the areas where tectonic plates are subducted, changing rocks by heat and pressure, with influx of fluids, but without melting. It has been a medium for carving for thousands of years.

A block of talc

Soapstone is composed dominantly of talc, with varying amounts of chlorite and amphiboles (typically tremolite, anthophyllite, and magnesiocummingtonite), and trace to minor FeCr-oxides. It may be schistose or massive. Soapstone is formed by the metamorphism of ultramafic protoliths (e.g. dunite or serpentinite) and the metasomatism of siliceous dolostones.

Pyrophyllite, a mineral very similar to talc is sometimes called soapstone in the generic sense since its physical characteristics and industrial uses are similar, and because it is also commonly used as a carving material. However this mineral typically does not have such a soapy feel from which soapstone derives its name. 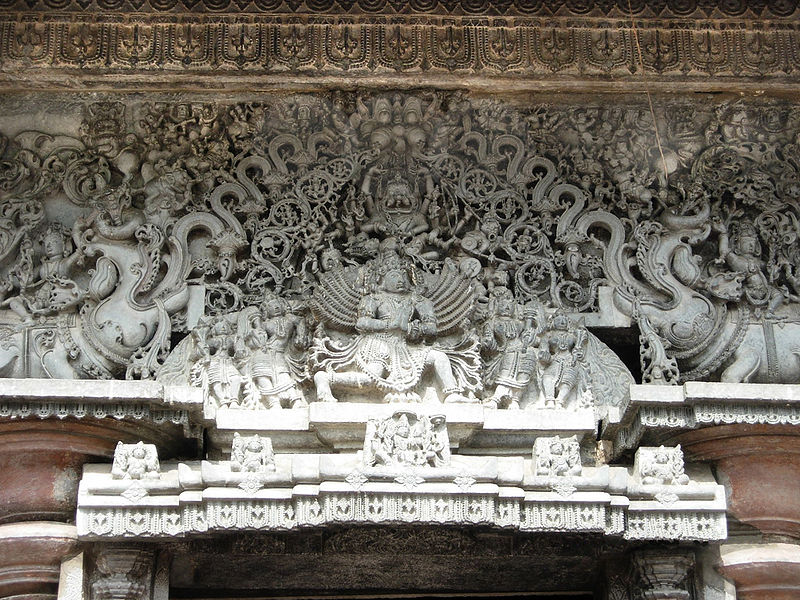 Soapstone sculpture on the Hoysala temple at Belur, India.

Steatite is relatively soft (because of the high talc content, talc being one on Mohs hardness scale), and may feel soapy when touched, hence the name. Soapstone is used for inlaid designs, sculpture, coasters, and kitchen countertops and sinks. Traditional Inuit carvings often use soapstone, and some Native American groups made bowls, cooking slabs, and other objects from soapstone, particularly during the Late Archaic archaeological period. Soapstone is sometimes used for fireplace surrounds and woodstoves because it can absorb and evenly distribute heat while being easy to manufacture. This is found in many upscale Alaskan homes. It is also used for griddles and other cookware.

Soapstone has been used in India for centuries as a soft medium for carving, but unfortunately the world wide demand for soapstone is threatening the habitat of India's tigers.The Hoysala Empire temples were made from soapstone.

Tepe Yahya, an ancient trading city in southeastern Iran, was a centre for the production and distribution of soapstone in the 5th3rd millennia BC

Another instance of use in the ancient world is found in Minoan Crete at the Palace of Knossos, where archaeological recovery has included a magnificent libation table made of steatite.

Kisii stone from Kenya is a type of pyrophyllite used by the Kisii people of the Tabaka Hills in Western Kenya. They use this material to make pots, used to carry fat for massaging into their skin to guard against the elements.

Combarbalite stone, exclusively mined in Combarbala, Chile, is known for its many colors. While they are not visible during mining, they come out after refining.

Palewa and gorara stones are types of Indian soapstone.

A variety of other regional and marketing names for soapstone are used.