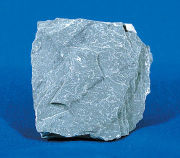 Slate is a fine-grained rock that can easily be split into thin slabs. It consists mainly of grains of mica, chlorite, and quartz and may also have calcite, pyrite, hematite, and other minerals. Most slate is gray to black in color, but the rock may be red or green, depending on its mineral content.

Slate is a metamorphic rock Metamorphic rock forms when heat or pressure, or both, cause changes in the "parent" rock. One of the changes is the formation of new minerals, called recrystallization. The new mineral grains often are larger than the old ones. Also, platy materials, such as mica, may crystallize in parallel planes. When this happens, the rock breaks easily along these planes. This characteristic of metamorphic rocks is called rock cleavage

How is it formed?

Most slate is formed below the earth's surface by changes in the makeup of shale, a sedimentary rock. Shale primarily consists of clay minerals and of fine particles of quartz. When shale is buried in the earth's crust, heat from deep in the earth or nearby magma (molten rock) changes the clay minerals in shale to mica and chlorite. Downward pressure caused by burial and deformation due to crustal movement squeezes the mica and other platy (flaky) minerals and forms them into parallel layers.

Much slate occurs in Scotland, Wales, France, southern Germany, and the Northeastern United States. Builders use slate for roofing and flagstones because it is weatherproof and long-lasting. Slate is also used to trim the fronts and lobbies of buildings, and for pool tables.

Slate can be made into roofing slates, also called roofing shingles, installed by a slater in the USA. Slate has two lines of breakability: cleavage and grain. This makes it possible to split slate into thin sheets. Fine slate can also be used as a whetstone to hone knives. Due to its thermal stability and chemical inertness, slate has been used for laboratory bench tops and for billiard table tops. In 18th and 19th century schools, slate was extensively used for blackboards and individual writing slates for which chalk pencils were used. Because it is a good electrical insulator and fireproof, it was used to construct early 20th century electric switchboards and relay controls for large electric motors. British sculptor Stephen Kettle is notable for his use of slate to create statues housed in the Science Museum in London. Slate tiles are often used for interior and exterior flooring or wall cladding. Tiles are installed and set on mortar and grouted along the edges. Chemical sealants are often used on tiles to improve durability and appearance, increase stain resistance, reduce efflorescence, and increase or reduce surface smoothness. Tiles are often sold gauged, meaning that the back surface is ground for ease of installation. Slate tiles were used in 19th century UK building construction (apart from roofs). They can be set into the walls to provide a rudimentary damp-proof membrane. Small offcuts are used as shims to level floor joists. Slate is often used as a decor in freshwater aquariums. Slate will not alter the chemistry of water (except in the slate containing feldspar which may leach silicates into the water resulting in excess diatom growth in marine aquaria). When broken, slate produces a natural appearance while remaining relatively flat and can be easily stacked. Silicone glue adheres to slate, creating a non-toxic bond to secure it. It is also used in stairs and pathways for the same reasons.

Slate-producing regions in Europe include Wales, Cornwall, and Cumbria, in the United Kingdom; parts of France (Angers, Anjou and in the Maritime Alps); Belgium (formerly); Liguria in northern Italy especially between the town of Lavagna (which means chalkboard in Italian) and Fontanabuona valley; Portugal especially around Valongo in the north of the country; Germany's (Moselle River-region, Hunsrück, Eifel, Westerwald, Thuringia and north-Bavaria); Alta, Norway (actually schist not a true slate) and Galicia. In the Americas, slate is found in Brazil (the second biggest producer of slate) around Papagaio in Minas Gerais (responsible for 95% of the extraction of slate in Brazil), the east coast of Newfoundland, the Slate Belt of Eastern Pennsylvania, and the Slate Valley of Vermont and New York. The area around Granville, NY, is one place where colored slate (non-blue) is mined. Others include Wales (purple and formerly green) and Cumbria (green) in the UK; Brazil (green); China (many colors); and Newfoundland. There was also a major slating operation in Monson, Maine during the late 19th and early 20th centuries. The slate found in Monson is usually a dark purple to blackish color, and many local structures are still roofed with slate tiles. Of many operations there is only one business currently operating. The output was so great it formed a train route throughout the woods of Monson and as many as 18 quarries were made. St. Patricks's Cathedral in New York's roof was made from roofing slate from Monson, as well as the Headstone of John F. Kennedy. Slate is also found in the Arctic and was used by the Inuit to make the blades for ulus. China has vast slate deposits; in recent years its export of finished and unfinished slate has increased