The Stawamus Chief is a granite monolith in British Columbia

Is a common and widely occurring type of intrusive, felsic, igneous rock. Granite has a medium to coarse texture, occasionally with some individual crystals larger than the groundmass forming a rock known as porphyry. Granites can be pink to dark gray or even black, depending on their chemistry and mineralogy. Outcrops of granite tend to form tors, and rounded massifs. Granites sometimes occur in circular depressions surrounded by a range of hills, formed by the metamorphic aureole or hornfels.

Granite is nearly always massive (lacking internal structures), hard and tough, and therefore it has gained widespread use as a construction stone. The average density of granite is 2.75 g/cm3 and its viscosity at standard temperature and pressure is ~4.5  1019 Pa·s. The word granite comes from the Latin granum, a grain, in reference to the coarse-grained structure of such a crystalline rock.

Close-up of granite from Yosemite National Park, valley of the Merced River

Granite is an igneous rock and is formed from magma. Granitic magma has many potential origins but it must intrude other rocks. Most granite intrusions are emplaced at depth within the crust, usually greater than 1.5 kilometres and up to 50 km depth within thick continental crust. The origin of granite is contentious and has led to varied schemes of classification. Classification schemes are regional; there is a French scheme, a British scheme and an American scheme. This confusion arises because the classification schemes define granite by different means. Generally the 'alphabet-soup'classification is used because it classifies based on genesis or origin of the magma.

Granite is currently known only on Earth where it forms a major part of continental crust. Granite often occurs as relatively small, less than 100 km² stock masses (stocks) and in batholiths that are often associated with orogenic mountain ranges. Small dikes of granitic composition called aplites are often associated with the margins of granitic intrusions. In some locations very coarse-grained pegmatite masses occur with granite.

Granite has been intruded into the crust of the Eath during all geologic periods, although much of it is of Precambrian age. Granitic rock is widely distributed throughout the continental crust of the Earth and is the most abundant basement rock that underlies the relatively thin sedimentary veneer of the continents.

Despite being fairly common throughout the world, the areas with the most commercial granite quarries are located in Finland, Norway and Sweden (Bohuslän), northern Portugal in Chaves and Vila Pouca de Aguiar, Spain (mostly Galicia and Extremadura), Brazil, Inda and several countries in southern Africa, namely Angola, Namibia, Zimbabwe and South Africa.

An old, and largely discounted theory, granitization states that granite is formed in place by extreme metasomatism by fluids bringing in elements e.g. potassium and removing others e.g. calcium to transform the metamorphic rock into a granite. This was supposed to occur across a migrating front. The production of granite by metamorphic heat is difficult, but is observed to occur in certain amphibolite and granulite terrains. In-situ granitisation or melting by metamorphism is difficult to recognise except where leucosome and melanosome textures are present in gneisses. Once a metamorphic rock is melted it is no longer a metamorphic rock and is a magma, so these rocks are seen as a transitional between the two, but are not technically granite as they do not actually intrude into other rocks. In all cases, melting of solid rock requires high temperature, and also water or other volatiles which act as a catalyst by lowering the solidus temperature of the rock. 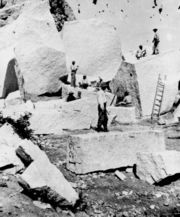 Quarrying granite for the Mormon Temple, Utah Territory. The ground is strewn with boulders and detached masses of granite, which have fallen from the walls of Little Cottonwood Canyon. The quarrying consists of splitting up the blocks

Granite is classified according to the QAPF diagram for coarse grained plutonic rocks (granitoids) and is named according to the percentage of quartz, alkali feldspar (orthoclase, sanidine, or microcline) and plagioclase feldspar on the A-Q-P half of the diagram. Granite-like rocks which are silica-undersaturated may have a feldspathoid such as nepheline, and are classified on the A-F-P half of the diagram.

True granite according to modern petrologic convention contains both plagioclase and alkali feldspars. When a granitoid is devoid or nearly devoid of plagioclase the rock is referred to as alkali granite. When a granitoid contains <10% orthoclase it is called tonalite; pyroxene and amphibole are common in tonalite. A granite containing both muscovite and biotite micas is called a binary or two-mica granite. Two-mica granites are typically high in potassium and low in plagioclase, and are usually S-type granites or A-type granites. The volcanic equivalent of plutonic granite is rhyolite.

The 'alphabet soup' scheme of Chappell & White was proposed initially to divide granites into I-type granite (or igneous protolith) granite and S-type or sedimentary protolith granite. Both of these types of granite are formed by melting of high grade metamorphic rocks, either other granite or intrusive mafic rocks, or buried sediment, respectively. M-type or mantle derived granite was proposed later, to cover those granites which were clearly sourced from crystallised mafic magmas, generally sourced from the mantle. These are rare, because it is difficult to turn basalt into granite via fractional crystallisation. A-type or anorogenic granites are formed above volcanic "hot spot" activity and have peculiar mineralogy and geochemistry. These granites are formed by melting of the lower crust under conditions that are usually extremely dry. The rhyolites of the Yellowstone caldera are examples of volcanic equivalents of A-type granite

Granite is a normal, geological source of radiation in the natural environment. Granite contains around 10 to 20 parts per million of uranium. By contrast, more mafic rocks such as tonalite, gabbro or diorite have 1 to 5 ppm uranium, and limestones and sedimentary rocks usually have equally low amounts. Many large granite plutons are the sources for palaeochannel-hosted or roll front uranium ore deposits, where the uranium washes into the sediments from the granite uplands and associated, often highly radioactive, pegmatites. Granite could be considered a potential natural radiological hazard as, for instance, villages located over granite may be susceptible to higher doses of radiation than other communities Cellars and basements sunk into soils formed over or from particularly uraniferous granites can become a trap for radon gas, which is heavier than air. However, in the majority of cases, although granite is a significant source of natural radiation as compared to other rocks it is not often an acute health threat or significant risk factor. Various resources from national geological survey organisations are accessible online to assist in assessing the risk factors in granite country and design rules relating, in particular, to preventing accumulation of radon gas in enclosed basements and dwellings.

Life-size elephant and other creatures carved in granite; Mahabalipuram, India.

The Red Pyramid of Egypt (c.26th century BC), named for the light crimson hue of its exposed granite surfaces, is the third largest of Egyptian pyramids. Menkaure's Pyramid, likely dating to the same era, was constructed of limestone and granite blocks. The Great Pyramid of Giza (c.2580 BC) contains a huge granite sarcophagus fashioned of "Red Aswan Granite." The mostly ruined Black Pyramid dating from the reign of Amenemhat III once had a polished granite pyramidion or capstone, now on display in the main hall of the Egyptian Museum in Cairo (see Dahshur). Other uses in Ancient Egypt, include columns, door lintels, sills, jambs, and wall and floor veneer. How the Egyptians worked the solid granite is still a matter of debate. Dr. Patrick Hunt has postulated that the Egyptians used emery shown to have higher hardness on the Mohs scale.

Many large Hindu temples in southern India, particularly those built by the 11th century king Rajaraja Chola I, were made of granite. There is a large amount of granite in these structures. They are comparable to the Great Pyramid of Giza 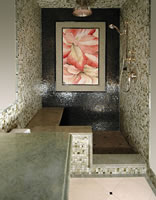 Granite counter and bench in bathroom

Granite has been extensively used as a dimension stone and as flooring tiles in public and commercial buildings and monuments. Because of its abundance granite was commonly used as to build foundations for homes in New England. The Granite Railway, America's first railroad, was built to haul granite from the quarries in Quincy, Massachusetts, to the Neponset River for transport. With increasing amounts of acid rain in parts of the world, granite has begun to supplant marble as a monument material, since it is much more durable. Polished granite is also a popular choice for kitchen countertops due to its high durability and aesthetic qualities.