The term porcelain refers to a wide range of ceramic products that have been baked at high temperatures to achieve vitreous, or glassy, qualities such as translucence and low porosity. Among the most familiar porcelain goods are table and decorative china, Flooring, Exterior Cladding, Spas and Steam Rooms, chemical ware, dental crowns, and electrical insulators. Usually white or off-white, porcelain comes in both glazed and unglazed varieties, with bisque, fired at a high temperature, representing the most popular unglazed variety.

Although porcelain is frequently used as a synonym for china, the two are not identical. They resemble one another in that both are vitreous wares of extremely low porosity, and both can be glazed or unglazed. However, china, also known as soft-paste or tender porcelain, is softer: it can be cut with a file, while porcelain cannot. This difference is due to the higher temperatures at which true porcelain is fired, 2,650 degrees Fahrenheit (1,454 degrees Celsius) compared to 2,200 degrees Fahrenheit (1,204 degrees Celsius) for china. Due to its greater hardness, porcelain has some medical and industrial applications which china, limited to domestic and artistic use, does not. Moreover, whereas porcelain is always translucent, china is opaque.

Hard-paste or "true" porcelain originated in China during the T'ang dynasty (618-907 A.D.); however, high quality porcelain comparable to modern wares did not develop until the Yuan dynasty (1279-1368 A.D.). Early Chinese porcelain consisted of kaolin (china clay) and pegmatite, a coarse type of granite. Porcelain was unknown to European potters prior to the importation of Chinese wares during the Middle Ages. Europeans tried to duplicate Chinese porcelain, but, unable to analyze its chemical composition, they could imitate only its appearance. After mixing glass with tin oxide to render it opaque, European craftspeople tried combining clay and ground glass. These alternatives became known as soft-paste, glassy, or artificial porcelains. However, because they were softer than genuine porcelain, as well as expensive to produce, efforts to develop true porcelain continued. In 1707 two Germans named Ehrenfried Walter von Tschimhaus and Johann Friedrich Bottger succeeded by combining clay with ground feldspar instead of the ground glass previously used.

Later in the eighteenth century the English further improved upon the recipe for porcelain when they invented bone china by adding ash from cattle bones to clay, feldspar, and quartz. Although bone china is fired at lower temperatures than true porcelain, the bone ash enables it to become translucent nonetheless. Because it is also easier to make, harder to chip, and stronger than hard porcelain, bone china has become the most popular type of porcelain in the United States and Britain (European consumers continue to favor hard porcelain).

The primary components of porcelain are clays, feldspar or flint, and silica, all characterized by small particle size. To create different types of porcelain, craftspeople combine these raw materials in varying proportions until they obtain the desired green (unfired) and fired properties.

To make porcelain, the raw materialssuch as clay, felspar, and silicaare first crushed using jaw crushers, hammer mills, and ball mills. After cleaning to remove improperly sized materials, the mixture is subjected to one of four forming processessoft plastic forming, stiff plastic forming, pressing, or castingdepending on the type of ware being produced. The ware then undergoes a preliminary firing step, bisque-firing.

Although the composition of clay varies depending upon where it is extracted and how it is treated, all clays vitrify (develop glassy qualities), only at extremely high temperatures unless they are mixed with materials whose vitrification threshold is lower. Unlike glass, however, clay is refractory, meaning that it holds its shape when it is heated. In effect, porcelain combines glass's low porosity with clay's ability to retain its shape when heated, making it both easy to form and ideal for domestic use. The principal clays used to make porcelain are china clay and ball clay, which consist mostly of kaolinate, a hydrous aluminum silicate.

Feldspar, a mineral comprising mostly aluminum silicate, and flint, a type of hard quartz, function as fluxes in the porcelain body or mixture. Fluxes reduce the temperature at which liquid glass forms during firing to between 1,835 and 2,375 degrees Fahrenheit (1,000 and 1,300 degrees Celsius). This liquid phase binds the grains of the body together.

Silica is a compound of oxygen and silicon, the two most abundant elements in the earth's crust. Its resemblance to glass is visible in quartz (its crystalline form), opal (its amorphous form), and sand (its impure form). Silica is the most common filler used to facilitate forming and firing of the body, as well as to improve the properties of the finished product. Porcelain may also contain alumina, a compound of aluminum and oxygen, or low-alkali containing bodies, such as steatite, better known as soapstone.

After the raw materials are selected and the desired amounts weighed, they go through a series of preparation steps. First, they are crushed and purified. Next, they are mixed together before being subjected to one of four forming processessoft plastic forming, stiff plastic forming, pressing, or casting; the choice depends upon the type of ware being produced. After the porcelain has been formed, it is subjected to a final purification process, bisque-firing, before being glazed. Glaze is a layer of decorative glass applied to and fired onto a ceramic body. The final manufacturing phase is firing, a heating step that takes place in a type of oven called a kiln. 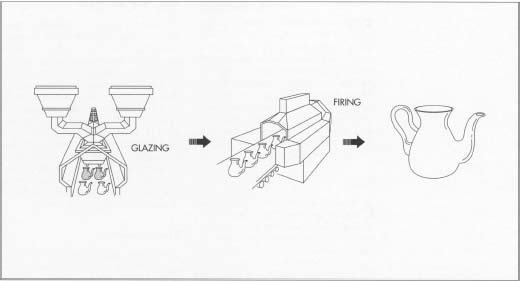 After bisque firing, the porcelain wares are put through a glazing operation, which applies the proper coating. The glaze can be applied by painting, dipping, pouring, or spraying. Finally, the ware undergoes a firing step in an oven or kiln. After cooling, the porcelain ware is complete.

The character of the raw materials is important in maintaining quality during the manufacturing process. The chemical composition, mineral phase, particle size distribution, and colloidal surface area affect the fired and unfired properties of the porcelain. With unfired body, the properties evaluated include viscosity, plasticity, shrinkage, and strength. With fired porcelain, strength, porosity, color, and thermal expansion are measured. Many of these properties are monitored and controlled during manufacturing using statistical methods. Both the raw materials and the process parameters (milling time and forming pressure, for example) can be adjusted to achieve desired quality.

In the American Tile factories, a certain percentage of product which is usable, but contains minor defects will be sorted and packaged in unmarked boxes as second grade, this material is generally shipped outside the country, where it is then re-classified according to the local standards, shipped back to the United States at a much lower cost. Most reputable dealers are aware of these practices and avoid representing these lines. AT&S is aware of these brands, and will not sell them.

High-quality porcelain art and dinnerware will continue to enhance the culture. Improvements in manufacturing will continue to increase both productivity and energy efficiency. For instance, a German kiln manufacturer has developed a prefabricated tunnel kiln for fast firing high-quality porcelain in less than 5 hours. Firing is achieved by partly reducing atmosphere at a maximum firing temperature of 2,555 degrees Fahrenheit (1,400 degrees Celsius). The kiln uses high-velocity burners and an automatic control system, producing 23,000 pounds (11,500 kilograms) of porcelain in 24 hours.

Manufacturers of porcelain products may also have to increase their recycling efforts, due to the increase in environmental regulations. Though unfired scrap is easily recycled, fired scrap poses a problem: mechanically strong and therefore hard to break down, it is usually dumped into landfills. However, preliminary research has shown that fired scrap can be reused after thermal quenching (where the scrap is reheated and then quickly cooled), which makes it weaker and easier to break down. The scrap can then be used as a raw material.

Porcelain appears to be playing a more important role in technical applications. Recent patents have been issued to Japanese and American companies in the area of electrical insulators and dental prostheses. NGK Insulators, Ltd., a Japanese manufacturer, has developed high-strength porcelain for electrical insulators, whereas Murata Manufacturing Co. has developed low-temperature-sintering porcelain components for electronic applications.

Where To Learn More